United States of the New Continent

Emir "Emma" Klamsky is one of the main characters featured in Front Mission 3. She is associated with the Purple Haze, a special task force of the Unified Continental States.

The accidental creator of MIDAS, Emma is trying her best to find and disarm it before a disaster happen. She came to Japan with the FAI's Purple Haze squad and several other agents after hearing of the accident at JDF Yokosuka Base. Her parents were killed on Bal's orders while fleeing the Imaginary Numbers project when she was 12. A very serious and responsible person, as well as being extremely intelligent and resourceful, Emma is the creator of almost every battle plan in her scenario, most notably the USN's airborne attack on Taiwan. She develops feelings for Kazuki as the game progresses. Emma is playable in her own scenario and is an important character in Alisa's.

As an Imaginary Number, Emma was created with the intention of being perfect and calculating. She indeed comes across this way when first introduced but her protectiveness of Alisa and developing relationship with Kazuki cuts through the ice and loses much of her coldly calculating nature. Like her sister, Alisa, she specializes in missiles, though she can also uses shotguns.

In the ending of her scenario, Kazuki's words hint that she might be pregnant. 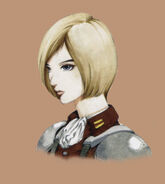