ISV09A-S Bismillah (aka ビスミラー, Bisumira, Vis Mirror) is the largest unit in Front Mission 2 and has a destructive firepower. The Bismillah is a mobile fortress of immense size at 4x3 squares that controls FENRIR's operations from the ground. It is encountered twice in the game: first it appears as boss piloting by Ven Mackarge in stage 27 and a second time in stage 30.

Bismillah has been developed as weapons of unmanned relay station FENRIR directive control. In Pusuta ~ radio induction, with the ability to assist in the induction of unmanned weapons around.

In the ultra-large machines with a relay function to facilitate the sending and receiving radio waves and guided weapons on the ground and FENRIR, and the move seems to be it was extremely difficult. It is also possible to send commands FENRIR On the other hand, when it was destroyed had been incorporated into the final program of FENRIR to run.

Point of gold paint has been applied is somehow reminiscent of boarding the Uragan Zelman, there is actually a common term. Weapons was equipped with the firepower of about whole body anomaly can be said. Therefore, a substantial voice and final boss of "2nd" from many players. 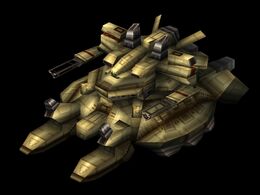 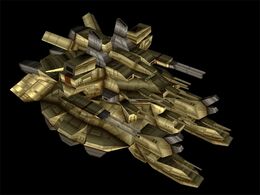 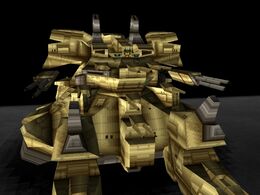 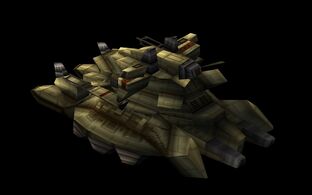 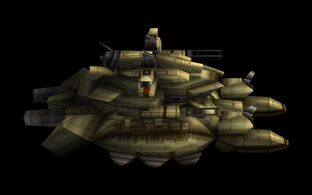 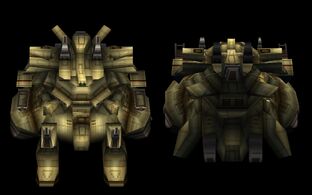 What makes the Bismillah so deadly is the sheer firepower of its weapons. It has an extremely strong
CN, a very strong AC, and a strong MS. All three weapons are more than capable of destroying anything in one attack, regardless of how much HP that unit has. With nine ammo in each weapon, it has more than enough ammo to wipe out your squad by itself. Need to have a lot of luck to survive even one attack from this monster.

The Cannon is its most dangerous weapon; 2 or 3 rounds connecting is virtually a guaranteed instant kill. Its Autocannon and Missile Launcher aren't as fatal, but they are powerful and will outright kill damaged units. The good thing is that the mobile fortress tries to empty its Missile Launcher first. The bad thing is that it always uses the Cannon if you try to attack it with Fight or Short weapons.

Aside from its weaponry, the Bismillah is immune to all status anomalies and Honor skills (Honor AP mechanics included). 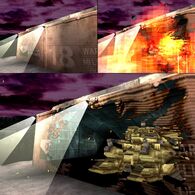 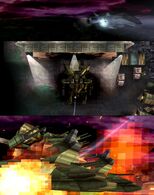 This version has the same destructive firepower as the one that Ven used, but it's fully maxed out in every area. More or less, its weapons will connect often any time it attacks. With 20 AP, don't expect its accuracy to drop until the Bismillah is down to hardly any AP left.

It has a nastier skill set as well: Critical and All or Nothing are virtually instant kills and Strike guarantees a 100% chance of instant kill. Find Out allows it to dodge anything so it's hard to deal damage to the unit.