The Kehei (Chinese: 克黑, lit. "Ominous Black") is a wanzer model that first appeared in Front Mission 3 and later in Front Mission Evolved. The model is produced by Shanghai Steel of the DHZ and is its most profitable product, directly competing with OCU Zenith or the USN Frost in terms of popularity and usage.

Before the introduction of the MULS-P2 standard, the Kehei was classified as an "Advanced Wanzer". Boasting above average offensive capabilities, prototypes of it were seen on the battlefield during a Japanese coup d'etat in 2112. Despite their impressive combat potential, the early Kehei models were high-powered machines with complete disregard to mass-productivity. Shanghai Steel's design philosophy with its flagship wanzer line wavered greatly during the Kehei's early stages. By 2171 however, the company managed to strike a good balance between cost and performance, making them more effective in combat. When the MULS-P2 standard was formed, militaries around the world, particularly the OCU, began importing Kehei models.

As mentioned earlier, Kehei prototypes were seen in Front Mission 3 as advanced, high-powered wanzers with a larger size and better performance than average wanzers. It has two known variants:

Both variants can also use its fist to strike close-range targets.

By Front Mission Evolved, Shanghai Steel created a few specialized Kehei models that were used by the Changli Army and Rapid Reaction Force. For example, the Kehei 35 used by Yun Tae Hwan is a lightweight, high mobility model that emphasizes fast strike capabilities. The laser cannons mounted on the back of the original Kehei 0 earlier were reported to be still in use for sniper-type Kehei models, but it is not seen in the game. All in all, the Kehei model is very versatile, and thus can be deployed as various roles, ranging from close range combat to long range support. 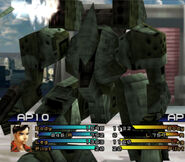 A Kehei 4 in Front Mission 3