The nations of Africa

Active
The Organization of African Consolidation, often shortened to OAC, is a supranational union featured in the Front Mission series, first appearing in Front Mission Alternative. The union's roots date back to 2026, when the EC and the OCU assisted the African nations in merging to form a super-state. Unlike the other unions, the OAC is divided into five regional blocs exercising limited independence – the South African United States (SAUS), Union of North African States (UNAS), West African States Community Union (WA), the Community of Central African States (CA), and the East African Community (EA).

In the early 21st century, racial divides and disputes between nations devolved into full-on civil wars across the African continent. In the aftermath of these conflicts, the EC, OCU and Republic of Zaftra dispatched troops to assist with peace mediation and reconstruction. During the reconstruction, the UNAS, with the backing of the EC, founded the "Organization of African Consolidation" with the goal of unifying Africa.

Although the OAC did much to help rebuild the shattered continent, its progress stagnated when the political situation between the African supra-nations began deteriorating once again. In 2030, the OCU announced it would be joining in military alliance with the OAC and the "Africa Continental Cooperative National Plan" was enacted to make the idea of a unified Africa a reality despite the challenges posed by significant degrees of civil unrest throughout the continent.

By 2034 unrest came to a violent fever pitch; so vicious was it that the OAC began formally requesting military assistance in suppressing insurgents and terrorists from it's international allies, which resulted in the establishment of the International Mobile Assault Company (IMAC) led by OCU Ground Defense Force 2nd Lt Earl McCoy (a joint operation force of OCU and SAUS soldiers), deployment of elite EC anti-terrorism units, and first ever fielding of the Wanderwagen (WAW) as a military platform.

IMAC traveled from the SAUS border first into the CA learning the terrorists of the ZAINGO front were fielding WAW of their own, they then entered WA assisting the West African Liberation Front (WALF) against fledgling Guinieana Independence movement insurgents, between these times fighting an EC based mercenary group known as Sinsemilla, and finally invading the UNAS to blunt their offensive into WA. With the UNAS forced to the negotiating table the IMAC then uncover the truth; a plot by Schnecke to sell wanderwagen at the highest bid across Africa utilizing Cerberus Garde to secretly destroy the states and prolong any unrest for profit laid the foundation for the unrest. Upon learning this the OAC demanded the EC suspend all aid and assistance to all African union states and withdraw from the continent.

In Front Mission 4 Zead Elger will tell Elsa Eliane and the rest of Durandal about the strained relationship between the EC and the OAC, describing it as somewhat unsalvageable and plagued with paranoia even some 62 years after the conflict in 2096 and sobering his views on international politics. In a nod to Front Mission Alternative's multiple endings Zead wonders whether or not Africa did better without EC assistance and continued walk on its own two feet.

During Front Mission 5: Scars of the War, news reports in the USN indicate that the continent continues to struggle with internal strife and is divided over whether or not conditions have improved with EC interference gone curiously echoing Zead's question. 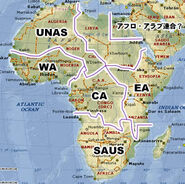 A map of the OAC