Front Mission 3
The Tianlei (Chinese: 天雷, "Heavenly Thunder") is a mobile weapon that appeared in Front Mission 3. It is said to be created by Shanghai Steel of the Da Han Zhong (D.H.Z.) and serves as a mobile fortress to launch operations. It uses treads to move, but due to its size, it is slow, uses a lot of power, and is limited in routes it can travel by. It has the firepower of a cruiser, but it is not deployed directly to the front lines.

The Tianlei is used by the Rapid Reaction Force as a mobile supply base and they both are commanded by Lie Yin Jiu. It is shown to be armed with two Yunsheng 42 missile launchers and six 100mm cannons. During the game, the Tianlei is being used on a campaign against the Hua Lian rebels. The main protagonist and his company will inevitably encounter the Tianlei during their journey.

During Emma's route, the player would help the U.C.S. backed Hua Lian rebels assault and destroy the Tianlei so that the Hua Lian rebels can ultimately invade Shanghai. However, the Tianlei is heavily armored against outside attacks and was also protected by both the Rapid Reaction Force and the Imaginary Numbers. The main protagonist and his company would need to infiltrate the Tianlei and destroy it from the inside. 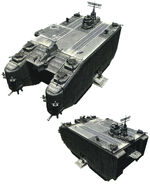