Front Mission 3 (Alisa storyline)
The Xiangyu (Chinese: 翔宇, a prominent Qin warlord) is a mobile weapon model that appeared in Front Mission 3. It is produced by Shanghai Steel of the DHZ and used by the Imaginary Numbers' leader, Lukav Minaev.

The Xiangyu is a massive, 6-legged mobile weapon with a design that resembles a gigantic lobster with two large front legs and four smaller rear legs. Its armaments include two Kongsheng 2 missile launchers and two Type 15 GR grenade launchers, and its armor was quite strong, capable of taking about twice the amount of damage than average wanzers before going down. It is also designed to be amphibious.

Despite the sheer power of its weapons, the Xiangyu lacks any self-defense weapons, which becomes its fatal weakness.

The Xiangyu only appears on the final stage of Alisa's route, where it was used by Lukav to stop Kazuki and his group from escaping the MIDAS' imminent detonation after their LST was stuck. The group was able to cripple it and escape, but the Xiangyu, along with Lukav, recovers and pursues the group, pinning their LST and almost killing Kazuki, had Emma do not interfere just as the MIDAS detonates and one of its beams hits the Xiangyu, destroying it along with Lukav. 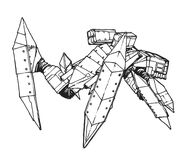 Crop of the Xiangyu 2 concept art sketch for Front Mission 3.