Front Mission 3
Yuji Kuroi is a non-player character in Front Mission 3 who appears in both Emma's and Alisa's story arc as an antagonist. He is a Commander of the J.D.F. Special Forces known as the Mobile Assault Force and works for Chief of Staff Sasaki. He is determined to carry out his duties and ideals in order for Japan to rise further in power and status on the world stage.

Kuroi is primarily seen piloting standard J.D.F. wanzers or the Shunyo Mk111. According to the Japanese Intelligence data, Kuroi has seen tours of duty abroad in both Alordesh after the coup events and Thailand as a Captain before returning to Japan and becoming Major.

In Emma's story arc, the player first meets Kuroi after leaving Kirishima Industries after the Yokosuka Base incidents. At the Kamariya JC (freeway) the protagonists were spotted by J.D.F. helicopters. Their transport truck was destroyed by the helicopters, and they were forced into combat against the J.D.F. along with the local police in the area. After proceeding in their wanzers up the freeway, Kuroi would spot the main protagonist and his group from the intersecting highway overhead. He gave the order to stop them from leaving Japan even if it means killing them, and the battle ensued which once again included the help of local police. However, Kuroi and his forces were defeated, and the protagonists escaped.

In Alisa's story arc, the player first sees Kuroi when he is speaking to Chief of Staff Sasaki. Given the events surrounding the recent explosion at Yokosuka Base, Sasaki had just finished a conversation with the O.C.U. Ministry of Defense. Sasaki would then give his order and in addition imply that the "rats sniffing around for MIDAS" be dealt with. Now being hunted by the J.D.F., the main protagonist and his group would arrive at a coastal power plant in an attempt to use the civilian bay to flee Japan. However, Kuroi would intercept them at the power plant. He demanded the hand-over of the scientist (Alisa). The main protagonist objected but he also revealed they knew about MIDAS. Kuroi concluded they must be killed to prevent the secret of MIDAS in Japan from being exposed. Much to his dismay, the main protagonist's group defeated his forces and managed to elude capture thanks to the intervention of a D.H.Z. submarine in coordination with Liu, the D.H.Z. agent helping them out of Japan. Kuroi was forced to admit failure to Sasaki, but Sasaki decided to let this one go and ordered Kuroi to continue on with their plan by seeking out and crushing the faction within the J.D.F. that would oppose them.

Kuroi would be out of the picture for the main protagonist and his party until they return to Japan amid the coup plot. By then, Lukav had maneuvered his way into Sasaki's inner circle. Kuroi, however, remained weary of Lukav and his ways. Unfortunately, Sasaki valued only Kuroi's loyalty and favored Lukav in tactics (and his knowledge regarding MIDAS). Kuroi was ordered to launch an assault on Kaita Base given they could not get assurance of Kaita Base's allegence; in addition, Kuroi was given the assistance of some of Lukav's Imaginary Number soldiers. However, he was not able to secure Kaita Base due to the intervention of the main protagonist's group, and the upon the Imaginary Number reporting the failure to Lukav, missiles were sent to destroy the Kaita Base area. Kuroi was furious at the loss of men, but Sasaki backed Lukav's call though demanded that Lukav not ignore his orders again. When the counter-coup forces lead by Isao Takemura began to mobilize, Kuroi would have a conversation with Sasaki where he expressed again his distrust of Lukav and personal belief against the plan to mass-production of and even the use of MIDAS. But Sasaki made clear again that he expected obedience from Kuroi, not opinions. As Kuroi campaigned against Isao's forces and the main protagonist's party, he became more disillusioned of Sasaki and outright distrustful of the Imaginary Numbers. Confident in his abilities, he plans to both carry out his goals and expose Lukav. However, as the counter-coup forces picked up momentum, Kuroi would learn that Lukav had fled to Kyushu and sent his forces after him while personally having been ordered to take care of Isao. But Kuroi also has had enough of Sasaki and struck out to carry out his dream and ideal for Japan without Sasaki. When the Prime Minister of Japan was freed by the efforts of the main protagonist and his group, Sasaki was betrayed by his former political allies and subsequently arrested; Kuroi would be no where in sight to help. 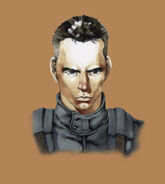